Audi unveils four plug-in hybrid variants, including one for the Q5 SUV 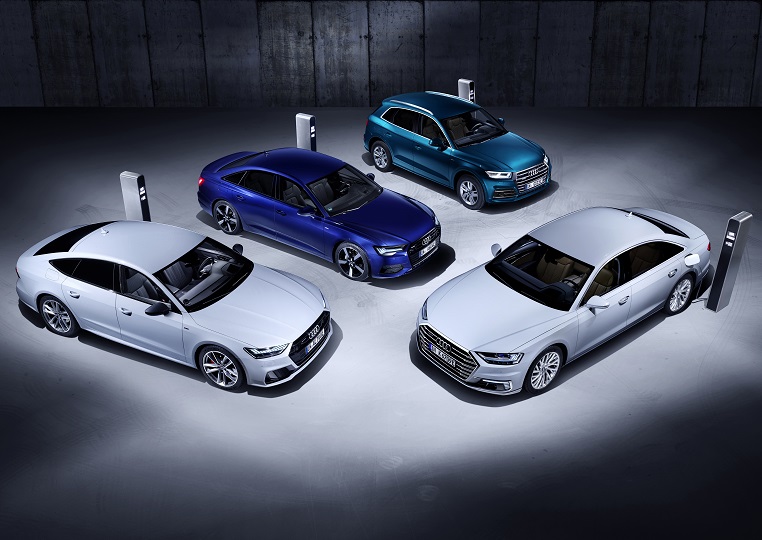 The nameplates to get electrified are the Q5, A6, A7 Sportback and the A8, each one of them featuring an all-electric range of 40 kilometers, so that customers can travel on around a third of their usual routes in electric-only mode during day-to-day driving.

Equipped with different output levels, each hybrid model will get either a comfort or a performance variant with a sporty configuration, S line scopes, a more tightly tuned suspension and drive setup with higher boost performance of the electric motor for more dynamic handling.

From now on, the new plug-in hybrid models carry the ‘TFSI e’ signet. In the future, the ‘e-tron’ label will remain reserved exclusively for electrically driven cars.

The plug-in hybrids use a turbocharged petrol engine that works together with an electric motor that is integrated into the transmission. The electrical energy is supplied by a lithium-ion battery mounted beneath the luggage compartment.

The electric motor can support the combustion engine during acceleration, resulting in high start-off performance and powerful acceleration.

The lithium-ion batteries for the A6, A7 and the A8 are made up of 104 pouch cells that are combined in eight modules and store 14.1 kWh of energy at a voltage of 385V. The battery pack in Q5 is comprised of prismatic cells but it has the same capacity.

Production of the Audi Q5 takes place at the company’s assembly plant located in the municipality of San José Chiapa, Puebla, in Central Mexico.

– Ford’s Mustang-inspired electric crossover is ‘is going to go like hell’, says chairman