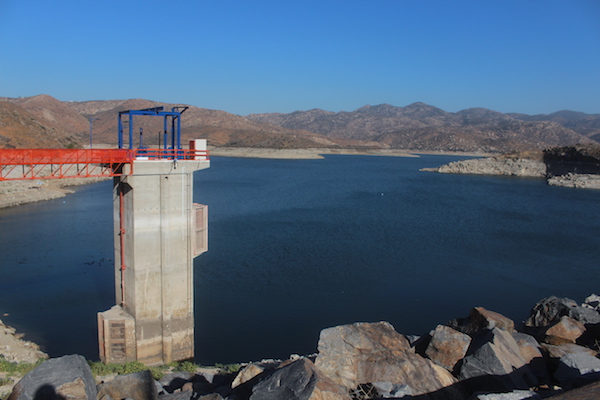 Baja California businesses and business groups are accusing the Baja California Governor Jaime Bonilla of extorting payments for water by threatening to cut off services for alleged unpaid bills.

Multiple businessmen say his administration has threatened their businesses with greater enforcement actions and long-term shut down if those organizations try to defend themselves against public allegations of theft and corruption.

The state governor insists he’s trying to clean-up widespread corruption that for years has plagued the state utility.

Even his critics acknowledge prior corruption within what is called the CESPT or the Comisión Estatal de Servicios Públicos de Tijuana (Tijuana Public Services Commission). CESPT’s substandard water delivery and drainage system frequently causes sewage to spill across the border onto San Diego beaches.

But some worry about the governor’s motivation for the high-profile investigation. The businessmen described similar encounters with the CESPT which they say amounts to extortion. Most of the meetings happened when the court systems were closed because of the coronavirus, leaving them with no legal recourse to defend themselves against the accusations. One company has won an amparo (Federal Court injuction) protecting them from having to pay.

Some allege the high-profile investigation is aimed at Bonilla’s political enemies. And they worry that it could be used to build up his own nest of funds.

Bonilla strongly denies the allegations, insisting his actions have nothing to do with politics or building a nest of funds. He says his aim is to clean up the pollution that plagues both Tijuana and San Diego beaches, resulting from years of underfunding and corruption within the water agency.

This is an additional controversy that Baja California and Mexico do not need, as it comes on the heels of the Constellation Brands polemic whereby the beer manufacturer’s water use rights were unilaterally cancelled abruptly halting the US$1.6 billion project in Mexicali, which was already US$900 million invested in construction of the facility.

Five businessmen agreed to talk with BORDERNOW anonymously about the current water controversy process, which they say amounts to extortion. They agreed to speak under the condition they would not be named because they said they fear retaliation against their businesses from the state government for speaking out.

“In our case it was just easier to pay the new charges than to fight them, but what is going on is not right,” said a businessman who asked not to be named because he feared retaliation against his company.

“Why would a multimillion-dollar company like Coca-Cola risk federal prosecution in both the U.S. and Mexico to rob $100,000 worth of water?” he asked, using the company as an example even though he is not affiliated with Coca-Cola.

All five business owners independently described a similar process and encounters with the CESPT and the external auditing company FISAMEX, which is collecting 20% of all the money it recuperates for the state, according to its contract. All owners claimed they were given very little time to examine the new charges and threatened with a shut-down if they did not pay immediately.

The businessmen each independently described being summoned to the office of the CESPT’s deputy director, Juan Pablo Guerrero Mercado. They said when they and/or their legal representatives arrived at the meetings they were told they had a debt of several million pesos detected by an external auditor, FISAMEX. They said they were told they have only a few days to pay the back charges or their services will be cut.

“They’re charging for like ten times the amount of water you used. It’s way too high,” said one businessman who asked not to be named. “And you have to go wait five to seven hours in line to pay the bill. We were only consuming 5 cubic meters and they charged us for fifty.”

The businessmen all claim the governor and the new state government is implementing a new fee schedule – not approved by the state constitution – to collect back pay on charges allegedly not collected up to a decade ago – when the water cost much less per unit.

A few business groups and attorneys for some of the companies swept up in the audit, as well as independent political analysts, agreed to speak on the record about their concerns.

“Here the issue is that what they are doing is practically extortion because instead of giving the business a reasonable time for the person to go present and clarify the issue or to receive the information from the agency, they are simply threatening to close the supply of both drinking water and residual discharges, and obviously that is quite a problem, because immediately after this COFEPRIS (an environmental agency) arrives and closes your business, industrial park or residence,” said Carlos Higuera EspIritu, the president of the Economic and Industrial Development of Tijuana (Deitac).

“What they are doing is criminal. And they want to be the victims?” Bonilla responded to the allegations. “Even in Mexico, it is illegal to dump toxic material into a water channel. We are doing the right thing.”

Independent political analyst Dr. Benedicto Ruíz Vargas, a writer and researcher who studies water issues and Baja California politics, said corruption within the water agency has been a well-known fact for decades.

Bonilla’s staunchest critics belong to the PAN and its candidates are the strongest opponents of MORENA, the political party of both the governor and nation’s president. Ruíz said Bonilla’s efforts could be seen as trying to debilitate the PAN before the next election cycle by probing the acts of previous PAN administrations in the Baja governorship.

More than 833 companies statewide have been implicated in the water agency’s billing irregularities.

So far, prosecutors have filed criminal complaints accusing 129 current and former officials of the water agency of bribery and conflict of interest.

Baja officials have already collected $27.3 million of the $34.2 million they say the prior administration did not collect from companies.

Meanwhile, some companies say they have or they will take their beef over the audit to the state’s legal system.

Tijuana attorney Aristeo Montaño said he has filed a claim as a precursor to a lawsuit against Baja California’s state-owned water company on behalf of his client, a U.S.-based company accused of water theft that he declined to name.

He said his legal brief claims the CESPT is unconstitutionally setting its own water-fee schedule, and that investigators failed to document the past water use for the new charges.

The U.S. company was threatened with a water shutoff that would have caused its operations to come to a grinding halt during a critical production period and it was never given a receipt or bill detailing the new charges, Montaño said.

A spokesman for the CESPT confirmed several U.S. companies had filed claims against the agency about the retroactive charges, but the spokesman said he could not release copies of the claims, which should be a public record, because they were in the possession of FISAMEX, the outside company conducting the audit.

Since Bonilla is only serving a two-year gubernatorial term, Montaño said he will likely avoid some of the political and public fallout when the cases make their way through the state legal system.

“When time comes that these cases are decided in court, Bonilla will be off in La Jolla having a margarita,” he said.

Several residents on both sides of the border said they are not concerned about the governor’s motivations for conducting the audit, as long it results in better management of the sewage and water-delivery systems.

“We just want the water cleaned up,” said Imperial Beach Mayor Serge Dedina, who has been a vocal critic of the cross-border sewage spills. “I couldn’t even begin to tell you what is happening or why. Our only focus is getting the border cleaned up — and what goes in with the bureaucratic or political fights in Mexico or Baja California is really beyond our purview.”

The concerns from Baja’s business community are just coming to light after the state approved a new state agency to collect taxes.

Baja California’s opposition parties   warned that the creation of the state Tax Administration Services or SAT BC would generate “fiscal terrorism” for maquiladoras and businesses. Critics say the institution will be a means for the governor to commit “political extortion” against those who disagree with him, an accusation Bonilla also strongly denies.

“If he finds it necessary to extort, it will be done through this newly created body and it is something that we find unacceptable and we are very concerned about,” said Abraham Correa Acevedo, the president of the PRD.

Foreign investment in Mexico, as elsewhere in the world, before they take an investment decision look for regulatory and political stability before cost savings. This situation definitely puts an additional burden for companies that are looking for Mexico as an efficient solution for the U.S./China trade wars and other issues that jeopardize business competitiveness.