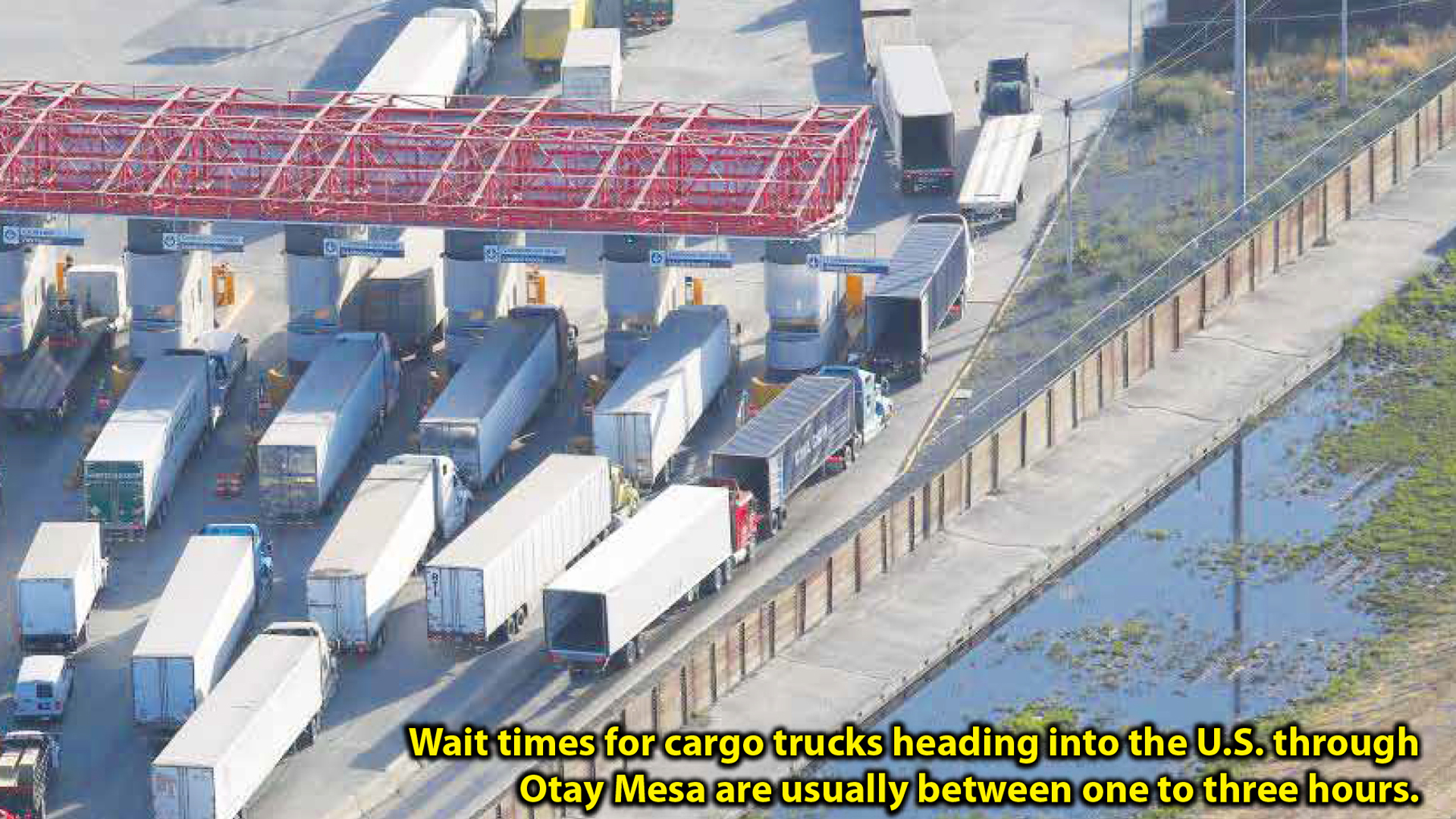 Freight transporters are facing wait times longer than eight hours on some days at the Otay Mesa Port of Entry, possibly because of changes to the
traffic lanes initiated by the City of Tijuana.

Those long waits have prompted complaints of “irregular practices” in the line leading up to the port of entry facility. Recently, the governor of Baja California called attention to “the abuse by municipal police” who control traffic in the area, while drivers reported that police officers are demanding bribes to guarantee fast-crossings of merchandise.

Several drivers told BORDERNOW they pay anywhere from US$40 to US$70 to be allowed to cut in the line at traffic lights. Police allow them to drive through the red light to get in front of dozens of other drivers already waiting in the line, they said.

“This is really the straw that breaks the camel’s back,” said Bonilla, as he described the situation via his daily update streamed live to Facebook. “It seems incredible that the facility that carries out ten thousand daily operations and the daily exchange of US$43 billion U.S. a year – but it is surrounded by these types of irregular practices.”

Wait times for cargo trucks heading into the U.S. through Otay Mesa are usually between one to three hours. Truckers often line up around 4 a.m.; two hours before the port facility opens at 6 a.m.

“Even if there isn’t heavy traffic, I still get in the line early, as early as I can get here, because you never know what is going to happen,” said one driver, who declined to give his full name.

Jaime Ruiz, a spokesperson for U.S. Customs and Border Protection, said there has been no recent change impacting wait times on the U.S. side of the border. On Sept. 21, wait times were two hours when the facility first opened at 6 a.m., but they had been reduced to 45 minutes by 8 a.m., Ruiz added.

Mexico and the U.S. agreed in March to curtail nonessential travel across their shared 2,000-mile border, but allow commerce and trade to continue without restrictions. Mexico became for the first-time last year the main U.S. trade partner with a total trade of US$615 billion between the two nations.

Every day, nearly US$1.4 billion in truck and rail freight crosses the entire U.S.-Mexico border, with shipments spread over dozens of crossings.

More than 3,000 cargo trucks cross daily at the Otay Mesa Port of Entry. Around US$85 million in exports travel from Tijuana through Otay Mesa every day, according to the Tijuana chapter of the Association of the Maquiladora and Export Industry (INDEX).

But, any slow-down in traffic can cause major reductions in that amount and drag down the local regional economy. For example, some truckers make two trips from Tijuana to Los Angeles during normal times, but major traffic delays can cause them to cancel their second daily trip north.

“I normally go up to Los Angeles and then come back to Tijuana again; reload television parts and then go back up to L.A. a second time, but right now I can only do one trip. There’s only so many hours in a day,” said trucker Manuel Gutierrez, who declined to give the name of the company he works for because he was not authorized to speak with the press.

Some say the traffic back-up has been caused by a pilot program launched by the City of Tijuana and Mexico’s National Chamber of Freight Transport (CANACAR).

“We are seeing that every time a pilot program is implemented, without getting the necessary consensus from the participants, which are in this case the transport companies, we see this type of chaos, apparently carried out by the City Council and spilling over onto the roads of Tijuana,” said
Guadalupe Sandoval, the president of Independent Transporters of Baja
California.

Before the changes, there were four commercial lanes on the Mexican side of the border, which included the Free and Secure Trade (FAST) lane for certified cargo, the Customs Technological Integration Project (PITA) lane, the regular or general lane for non-certified cargo and the lane for trucks that are crossing empty into the United States.

Tijuana officials reduced the four lanes to two: one for general and empty cargo crossings and one for the PITA cargos, even though demand shows there are more general crossings, according to truckers and Sandoval.

The Association of the Maquiladora and Export Industry (INDEX) said it supports the idea of separating regular loads from certified ones to improve mobility in the traffic corridor. Luis Hernández, president of the Costa Zone INDEX, said that the municipal transit department in coordination with CANACAR implemented the strategy of separating the regular loads from those that are certified to allow freight transport to cross the border
in less time.

However, truckers say the change is not having the desired impact because there are many more trucks with general cargo than those that have certified merchandise.

Otay Mesa Chamber of Commerce Executive Director Alejandra Mier y Teran said the traffic back-ups could be the culmination of several different issues coming into play at once; such as an increase in the number of trucks crossing, construction at the border and the traffic changes on the Mexican side.

Contractors began in May working on a US$137.2 million construction project to expand pedestrian and commercial truck processing areas, according to CBP and the U.S. General Services Administration.

Increased traffic, in general, or increased trade could be causing the long traffic delays on some days, according to business organizations.

Business experts pointed to the total number of trucks crossing through Otay Mesa increasing, which they said was especially significant since many non-essential Baja California manufacturing plants are still not operating under coronavirus restrictions.

The Otay Mesa Chamber of Commerce requested additional hours of operation at the Otay commercial port because of the increased demand.

Despite the shut-down of some non-essential commerce on both sides of the border caused by the coronavirus pandemic, total cargo crossings in fiscal year 2020 through July only fell slightly.