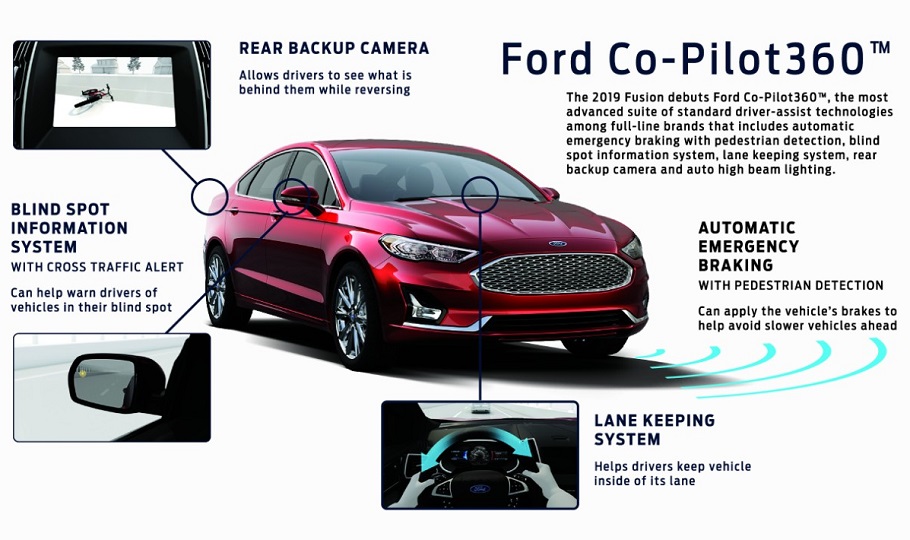 Ford Motor Company announced it has chosen the 2019 Fusion sedan to be the first Ford vehicle globally with standard new state-of-the-art Co-Pilot360 driver-assist technology. The vehicle will also feature a new, sleeker styling for all models and greater projected all-electric driving range for the plug-in hybrid Fusion Energi trim level.

The new Fusion, which makes its public debut at the New York Auto Show later this month, will be in showrooms by late summer – complete with new technology to make driving safer and easier. The sedan is manufactured in Hermosillo, Sonora, with 209,000 units sold in 2017.

“People tell us they are stressed with crowded roads and more distracted drivers and pedestrians. Our Ford Co-Pilot360 with standard automatic emergency braking and other technologies can help them drive more confidently so they can enjoy the journey,” said Corey Holter, Ford car group marketing manager. “For our green-minded customers, we’ve amped up our Fusion Energi with a projected increase of nearly 20 percent electric-only driving range,” Holter added.

Automatic emergency braking helps reduce the severity of or potentially avoid collisions with other vehicles and pedestrians who might accidentally cross in front of the car’s path.

Beyond standard Ford Co-Pilot360 Protect is a more advanced bundle of optional driver-assist technologies that makes driving even easier. Ford Co-Pilot360 Assist includes adaptive cruise control with stop and go, which automatically accelerates and brakes to a full stop when traffic halts, while maintaining a safe distance from the vehicle ahead.

Fusion SE and above models now include a standard embedded 4G LTE modem providing Wi-Fi for up to 10 devices. Furthermore, SYNC 3 with the Ford+Alexa app offers access to Alexa skills, like adding items to a shopping list or playing music. New Waze compatibility will help drivers avoid troublesome traffic spots. Commands and functionality for Ford+Alexa and Waze may vary depending on smartphone and required software.

The new Fusion Energi is projected to offer an EPA-estimated electric-only range of 25 miles, which is nearly 20% greater than that of the current model. Ford engineers designed a new 9.0-kilowatt-hour air-cooled lithium-ion battery offering greater energy capacity with no change to the physical size of the battery pack.

Based on data generated by more than 23,000 MyFord Mobile plug-in hybrid customers over several years, Ford estimates the 2019 Fusion Energi will potentially allow up to 80% of plug-in customers to drive their typical daily commute on electricity alone, with the support of both home and workplace charging, assuming the vehicle is fully charged daily at home and at work.

The Fusion brings new front and rear styling including a new grille featuring a five-bar design finished in chrome on S, SE and SEL models and new chrome mesh on Titanium. This sleeker Fusion also features a new trunk lid panel, fog lamps and LED taillamps. Two new wheel designs and fresh color palettes inside and out also debut for 2019.

A simplified Ford Fusion lineup now includes even more technology and style for 2019: The new Fusion models include:

Fusion V6 Sport: With standard all-wheel drive and 380 lb.-ft. of torque, the 325-horsepower Fusion V6 Sport remains the most powerful car in its class.

– By adding four new trucks and SUVs, Ford aims to replace 75% of its lineup in 2 years

Railroad tracks in Chihuahua were released