Ford vows zero job losses in the U.S. by shifting production to Mexico 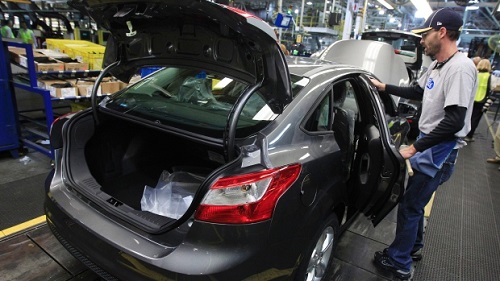 Ford said there will be zero job losses in the U.S. as a result of the new plant in Mexico. The Wayne, Michigan, plant that now builds the Focus and C-Max that will move to Mexico will instead start building other models -probably the new Ford Bronco SUV and Ranger small pickup.

“Ford has been in the United States for more than 100 years. Our home is here. We will be here forever,” said spokeswoman Christine Baker to CNN.

Ford committed to build new vehicles at the Michigan Assembly Plant to take the place of the Focus and C-Max when it reached a new contract late last year with the United Auto Workers union, which represents 3,900 hourly workers at the plant.

And while Ford is shifting production of all small cars to Mexico, it will continue to make many car models at U.S. plants, including the iconic Mustang.

The small cars Ford is shifting to Mexico are less popular and less profitable models.

Trump has been using Ford for months as a prime example of what’s wrong with U.S. trade policy, but Ford has been strongly rebutting the GOP nominee.

The issue surfaced again on Wednesday when a Ford executive, speaking at a conference for investors, reiterated the company’s plans to move its small car production to Mexico.

During a Fox News interview, Trump vowed to impose a 35% tax on cars built in Mexico if they’re shipped back to the U.S.