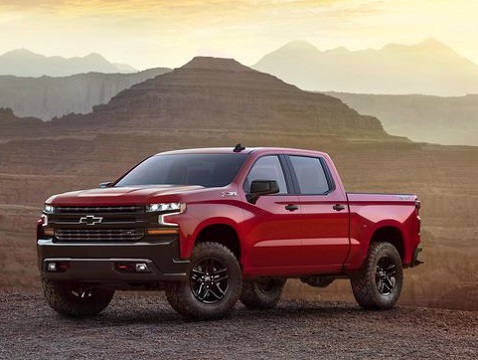 Thanks to its increased use of mixed metals, the pickup is 450 pounds lighter than its predecessor, featuring a roll-formed (not stamped) high-strength bed, it boasts the biggest box in the segment, increasing width by seven inches and length by one inch over the current model.

The bed also features the first-in-its-class power tailgate that can be opened or closed by key fob, cabin button or hand.

GM will offer six different engine and transmission combinations, including a new 3.0-liter inline six-cylinder Duramax diesel paired to a 10-speed automatic gearbox. Other engines available are the 5.3-liter and 6.2-liter V8 with Dynamic Fuel Management, a new system that allows it to run on between one (yes, one) to seven cylinders, depending on load demand.

According to Autonews, the redesign and re-engineering of the next Silverado and its GMC counterpart, the Sierra, are the biggest product program ever undertaken by GM. The company is spending nearly US$ 3 billion alone to upgrade the three plants that build the Silverado and Sierra.

At the event where the 2019 Chevrolet Silverado pickup was unveiled, “Barra twice did not answer directly when asked if the automaker is reconsidering current production in Mexico in light of potential changes or the collapse of the trade deal,” the Canadian news outlet revealed.

– Mexico outpaces its main competitors in the U.S. auto market during 2017