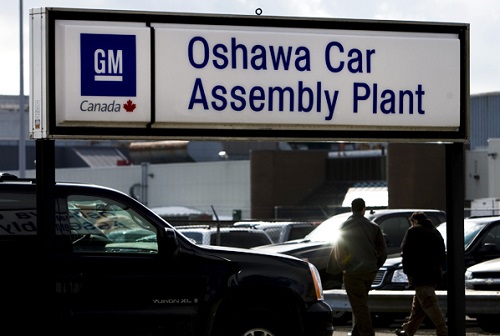 Unifor and General Motors of Canada have reached a tentative contract settlement, averting a strike that was scheduled to begin on Monday night at 11:59 p.m. ET, Canadian media outlets reported.

The agreement with GM will see some unspecified production coming from Mexico to the St. Catharines plant, reversing a trend that has been a “straight migration of auto jobs from Canada to Mexico”, Unifor president Jerry Dias said.

There had been fears the Oshawa facility might shut down in 2019, but Dias said the contract ensures a commitment by the company worth hundreds of millions of dollars.

“Our fear of a closure in 2019 is now over,” he said. “The facilities clearly have a bright future.”

Dias didn’t divulge what will be built in Oshawa beyond that year, but said it will be the “first and only plant in North America that will have the ability to build both cars and trucks” and added there will be additional jobs in both the short and long-term.

Related posts:
Aguascalientes A1 plant is Nissan's fastest in the world
Nidec would manufacture transmissions for electric cars in Mexico
Chihuahua seeks to position itself in the aerospace, automotive and electronics industries
John Deere invests US$55 million in Nuevo Leon