GM unveils the 2019 GMC Sierra Denali, its most luxurious pick up to date 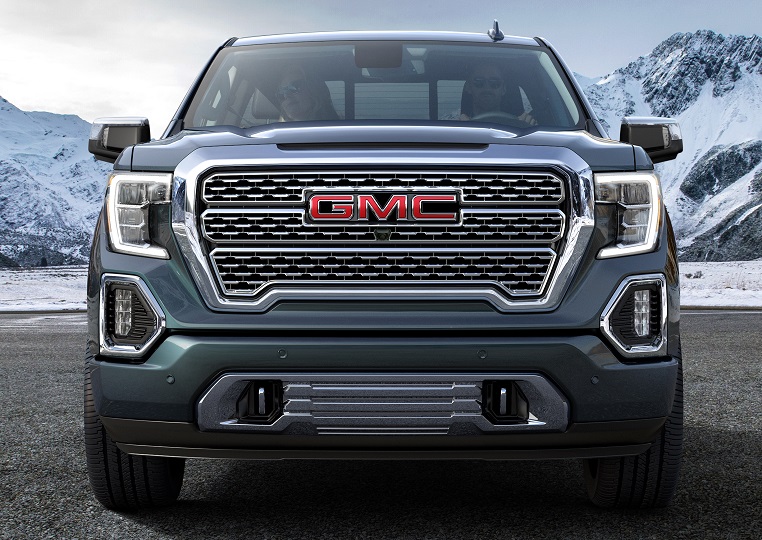 General Motors revealed its latest addition to the high-end truck market Thursday with the 2019 GMC Sierra Denali and SLT pickups at the Russell Industrial Center in Detroit, loaded with never-before-seen features such as its MultiPro tailgate and carbon fiber box, as well as premium level amenities, including a head-up display, high-definition video rearview mirror and sophisticated interior materials.

The Sierra is bigger in every dimension, a response to focus groups who wanted a Sierra “that projects strength,” said exterior design boss Matt Noone. Its wheels have been pushed closer to the corners of the vehicle and have 22-inch wheels.

Despite being larger in every dimension, the new Sierra weighs up to 360 pounds less than its predecessor. Comparatively, the Silverado dropped up to 450 pounds.

The bow gets a complete remake with an even taller front fascia. The top-trim Denali grille features more chrome, a material that also outlines the truck’s side glass, and even the Denali tailpipes get rectangular, chrome tips for the first time.

“The next generation 2019 Sierra Denali establishes a new benchmark in capability and refinement. It exemplifies precision in every detail,” said Duncan Aldred, vice president of Global GMC at the presentation. “We’ve been building toward this launch for four or five years. We’re still exploring how premium the brand can become.”

No doubt the most outstanding feature is the MultiPro tailgate, which GMC claims to be “the most innovative pickup tailgate ever”, with six unique functions and positions offering enhanced second-tier loading and load-stop solutions, a standing workstation and easier access to items in the box.

As for the carbon fiber cargo box, it’s also the first time a material usually seen in race cars and aircraft is used in the pickup segment, which makes this essential component stronger and lighter than the Chevy Silverado and Ram 1500’s steel boxes.

According to the company, it did so well in durability tests that GM re-engineered the Sierra’s standard steel box based on things it learned working with carbon fiber.

The MultiPro tailgate will be standard on the SLT and Denali models that account for 90% of Denali sales and available on other models, but the carbon fiber box will be optional only in the Sierra’s top Denali model.

As for the interiors, the cab is bigger than the old Sierra with more head and leg room. The controls feature big dials and buttons intended for easy use wearing gloves or driving through a bumpy work site. The trim includes open-pore wood and real aluminum.

The rear seats of crew cab models have a pair of storage bins hidden in the back cushions, each big enough to hold a laptop.

Like the Silverado, the Sierra gets updated versions of the 5.3-liter and 6.2-liter V-8 engines as well as a new 3.0-liter inline-six turbodiesel engine. The V-8 engines have stop/start technology and Dynamic Fuel Management that enables the engine to operate on one to eight cylinders, depending on demand. The available 6.2-liter and the diesel engines are paired with a 10-speed automatic transmission and the 5.3-liter is mated to GM’s eight-speed.

GMC will announce 2019 Sierra prices later, but analysts predict the top Denali model will reach US$ 70,000 when optioned up with the carbon fiber box, the head-up display and high-definition video rearview mirror.

That doesn’t seem to bother Mark Reuss, president of GM North America, who claimed that “GMC customers want the best and they are willing to pay for it”.

“Denali itself has average transaction prices higher than Mercedes, Jaguar, BMW, all the luxury brands, so if it was a standalone luxury brand, Denali would command higher prices and bring in a lot more money so that’s the brand we have in sight at GMC,” said Reuss, highlighting the average Denali transaction price is almost US$ 57,000.

According to Autonews, the redesign and re-engineering of the next Chevrolet Silverado and its sibling the GMC Sierra, are the biggest product program ever undertaken by GM. The company is spending nearly US$ 3 billion just to upgrade the Fort Wayne, Indiana, and Silao, Guanajuato, plants that will build those trucks.