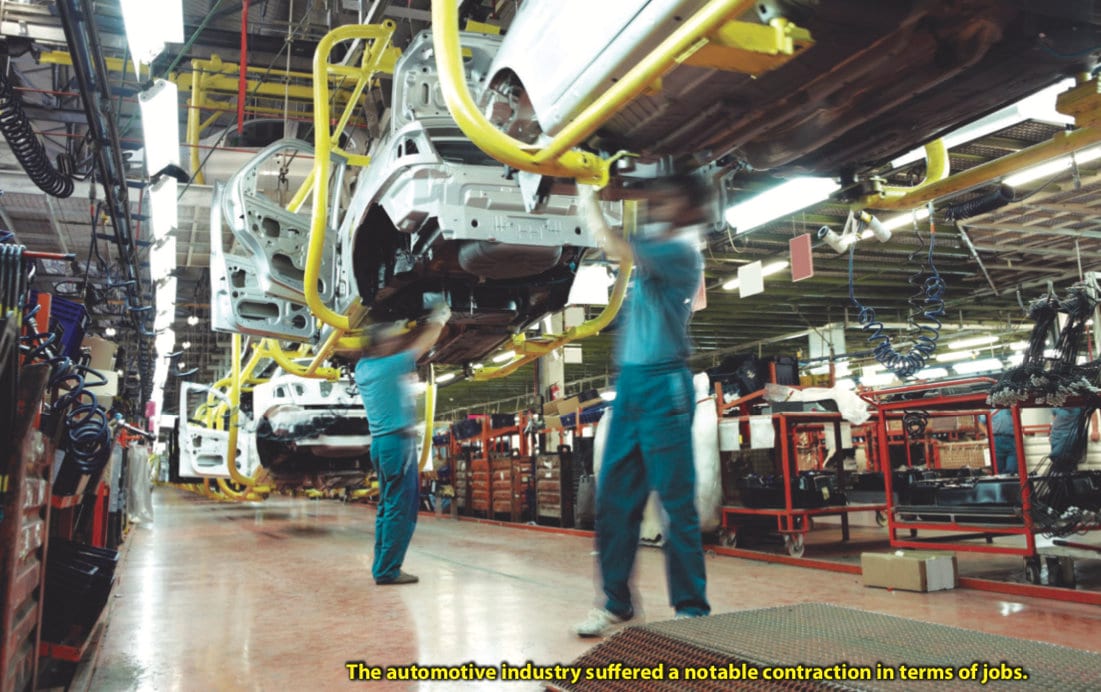 Recently, the National Institute of Statistics and Geography (INEGI) reported that, at the end of 2020, nine
of the 21 activities that comprise Mexico’s manufacturing industry had recovered production levels prior to the COVID-19 pandemic and, consequently, their workforce has benefited.

Among these activities, the manufacture of electrical appliances and electrical power generation equipment stands out, with an increase in its workforce of 8.6% in December 2020 compared to the same period of the previous year.

Together, these nine activities, which concentrate almost two out of every three manufacturing jobs (60.5%), reported an annual increase in their employed personnel of 2.5% last December.

Despite this, the manufacturing workforce is still 1.0% below the level reported a year earlier (2019). So, the problem of unemployment persists and everything seems to indicate that the only way to alleviate job unemployment is to fall into informality, at least as a short-term solution.

The threat of informal employment

According to the Inter-American Development Bank (IDB), by 2021 it is estimated that the number of workers in the informal sector in the economies of Latin America and the Caribbean will increase by 7.5 million, with which the rate would rise from 60% to 61.3% in average for the entire region. “There could be a higher increase in informality than there was before the pandemic of up to 7.5 million more,” said Giulia Lotti, a specialist in the IDB’s Office of Strategic Planning and Effectiveness, during the seminar “COVID-19 and informality.”

According to the current administration, unemployment is an enemy to be overcome. For example, Tatiana Clouthier, Secretary of Economy, during her recent participation in the World Economic Forum, assured that the greatest challenge facing the country is to find the formula to recover the jobs lost due to COVID-19.

The official highlighted that in 2020 around 657,000 jobs were lost in Mexico as a result of the health crisis. “People say: either we take care of health or we take care of employment. The challenge is to find a balance between the two things,” she pointed out.

In 2021, the recovery of jobs to prepandemic levels seems almost unattainable. In particular, the Mexican labor market got off to a dubious start, as formal employment continued to show instability in January and February with a worrying trend towards lower wages, according to the consultancy BBVA Research.

“Closing the job loss gap in 2021 would require unprecedented job creation,” he added. Such a creation would need to reverse the decline in investments, “which have been showing weakness since 2018.” Following this scenario, Mexico’s ability to consistently close the labor gap seems difficult, “given the current outlook of weak domestic demand and the uncertainty that generates problems of inconsistency, such as the structural weakness of investment,” indicated BBVA Research.

In the automotive sector …

One of the key industrial sectors in Mexico, partly due to its great capacity to create jobs, is the automotive industry, which generates around 1 million direct jobs in the country and 5 million indirect ones.

However, since 2019, and more significantly during the past year, the industry suffered a notable contraction in terms of jobs. For example, according to INEGI data, from March to June 2020, 64,285 people lost their jobs in the automotive sector. However, for the month of October of the same year, 49,017 positions were recovered, that is 76.2% of the positions that had disappeared.

Members of the industry have indicated that this has been possible thanks to the economic recovery of the United States (one of the most important markets for the sector) and the commercial certainty that prevails thanks to the USMCA; and, also, to the measures implemented to maintain productivity without risking the health of
employees.

For this year, the Mexican automotive sector foresees a rebound of almost 12% in the production, export and sale of vehicles in 2021, after the falls of 2020. “The prospects for the United States and Canada markets are quite favorable
for 2021, and that will allow us to maintain a trend of gradual return to the prepandemic figures,” said Fausto Cuevas, general director of the Mexican Automotive Industry Association (AMIA), at a press conference. Due to these circumstances, employment is expected to increase equally in said industry.

Control of outsourcing, will it affect employment?
For its part, the issue of labor reform, specifically the chapter on outsourcing, has generated much uncertainty in the area of job opportunities in Mexico.

Although it is a matter still on the table, as at the close of this edition it is expected that May 1 will be the final date for the federal government to announce the final rules.

The Mexican government and the private sector have already reached preliminary agreements regarding outsourcing. This will only be allowed for specialized services and, in other cases, companies will have 3 months to integrate subcontracted personnel to the payroll, as well as restrict this practice to “specialized services other than the corporate purpose and the predominant economic activity of the company,” says a brief statement from the government.

According to the Ministry of Labor and Social Welfare (STPS), more than 4 million Mexicans work under the outsourcing system, and of these, 2.9 million would be under an illegal subcontracting scheme. While the government considers the ban as a tool to have a more equal labor market, analysts and businessmen have pointed out that the measure may be counterproductive.

The Business Coordinating Council, for example, has indicated that the proposal discourages the creation of
jobs, which has caused a sharp drop in GDP of 8.5% in 2020 and that threatens to swell the ranks of the informal economy, which already employs more than half of the workers.

Likewise, on the issue of Employee Participation in Company Profits (PTU)— an item that is being contemplated in this labor reform—an agreement has been reached to eliminate discretion, which means three months of salary as the limit of PTU for every worker.

With this new limit, the authorities will have to modify Article 127 of the Federal Labor Law, by adding section VIII: “The amount of profit sharing will have a maximum limit of three months of the worker’s salary or the average of the participation received in the last three years; the amount that is most favorable to the worker will be applied.”

However, the move is likely to cause problems for smalland medium-sized companies. This is what specialists have said, like Ricardo Martínez Rojas, from the De la Vega y Martínez office, who has explained that they will hardly be able to withstand an increase of this size.

All forecasts indicate a complex 2021 in terms of workforce recovery. The other important clue that the analyzes made by both public and private entities leave us is that as long as there is no decisive boost to the reactivation of key economic sectors for the country’s growth, as well as attracting new investments, our workforce will continue to be in the doldrums, and will have to get involved in informal work to be able to get out of trouble.