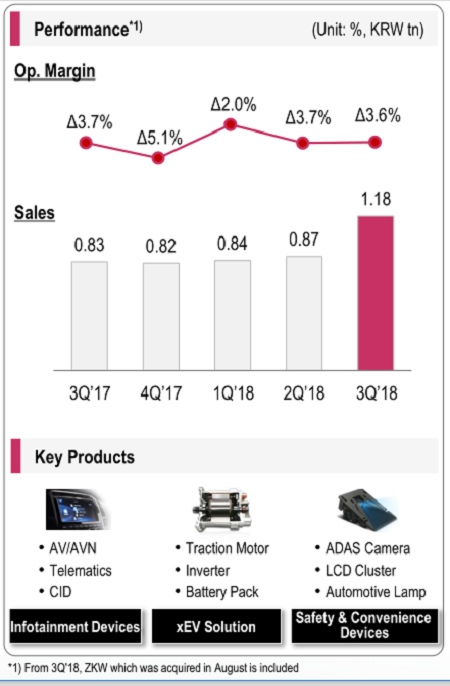 Following the acquisition of Austrian automotive light manufacturer ZKW, LG Electronics Inc. expects its output capacity of vehicle components (VC) will increase 31% by the end of year in terms of volume, the South Korean firm revealed in its third quarter earnings report.

The company produced around 11,338,000 automotive components in the first nine months of 2018, which is 98.2% of its total capacity, estimated in 11,544,000 units for that period. However, the VC division is expected to reach an annual capacity of 15.39 units due to the addition of ZKW, one of the world’s top three automotive light manufacturers, whose acquisition reflected on the company books for the first time in its third quarter report.

Last May, LG’s Board of Directors approved the acquisition of ZKW Group for EUR 1.1 billion (US$ 1.31 billion). The deal included manufacturing bases in Czech, Slovakia, Austria, India, China and Silao, Guanajuato, in Central Mexico, where the Austrian company also runs a research and development center.

The Mexican facility, opened in May 2016, supplies light-emitting diode headlights and lighting modules for automakers in North America such as General Motors and BMW.

The acquisition is part of LG Electronics strategy to expand its automotive business, which now ranges from vehicle infotainment system including telematics and navigation to other auto electronics, lights and electric car parts.

– LG acquires automotive lighting supplier ZKW for US$ 1.31 billion, including a plant in Guanajuato