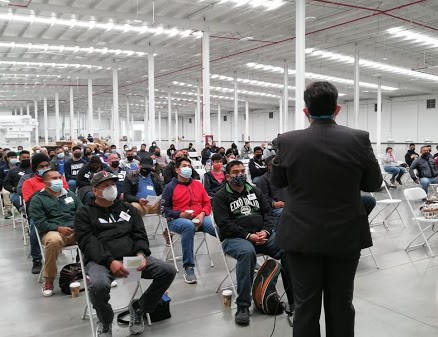 TIJUANA – In a space of almost 20 thousand square meters in the Pacifico industrial park is where Living Spaces, one of the main furniture manufacturers in the United States, decided to settle with the Tecma group to start operations in Tijuana with a project that includes up to 500 new jobs.

For Antonio Domínguez, vice president of Tecma group, the millionaire investment is not a coincidence, but the product of an analysis of US investors with a view to a significant expansion in Mexico to expand its production capacity, mainly to the United States and Canada.

The balance favored Tijuana due to two main factors: the experience and trust of allies such as Tecma group and the high quality of the workforce that the city offers, explained the corporate.

At 10 o’clock on Monday, the little more than 100 employees already integrated began with the Living Spaces operations under a work environment that stands out from the rest.

“We initially have a bonus of 7,500 pesos for hiring, but also a savings fund for the entrance and dining room; of course there are also legal benefits such as social security, INFONAVIT, Christmas bonus, utilities and after the first contracting phase we will also have transportation ”, explained Patricia Uribe, Human Resources manager.

Now the challenge for Tecma group is to get the best profiles to fill vacancies such as shipowners, upholsterers, fillers or administrative and technology positions.

Living Spaces joins the more than 30 companies, ranging from the aerospace or electronic branch to medical and irrigation, which have chosen the Tecma group as an ally to carry out their investments in Tijuana.