Marriott Four Points by Sheraton invested US$14 million in Juárez 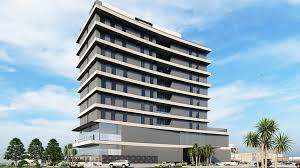 JUAREZ – The Marriott Four Points by Sheraton hotel will have its first branch in Ciudad Juárez, with an investment of close to US$14 million, reported Brasa Desarrollos, who is in charge of designing the master plan.

According to the developer, the hotel consists of a basement, nine floors and 139 rooms, which include six suites. This branch will open its doors in May 2021.

In addition, it also has a rooftop with pool and gym, meeting room for more than 200 people, bar and restaurant service, as well as more than 1,000 square meters of interior area and terrace for restaurants and bars on the ground floor, which will be added to those already existing in the Cantabria complex.

The hotel will operate under the Marriot Four Points by Sheraton franchise and will generate up to 50 direct jobs as well as another 200 more indirect ones.

Designed for the savvy, independent traveler, Marriot Four Points by Sheraton offers the timeless style and comfort guests seek, along with genuine service.

Four Points is part of the portfolio of Marriott International, the world’s largest hotel chain, with more than 1.2 million rooms in around 6,000 resorts.