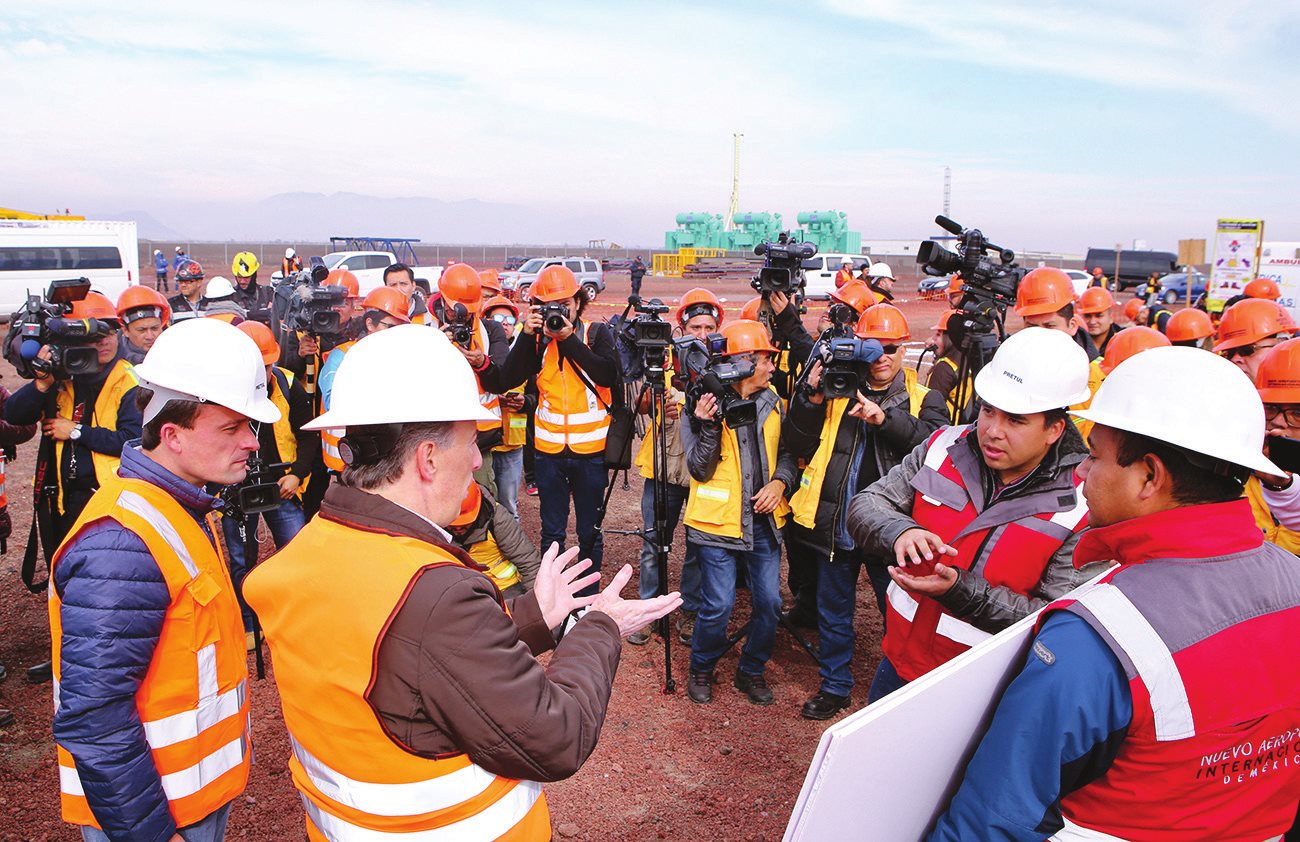 The 7.1 magnitude earthquake that hit Mexico City last year caused chaos throughout the metropolis, including the city’s transport system. However, it was notable that work on the city’s new international airport resumed after only a few hours of closure.

That somehow seemed to be a metaphor for a 21st Century Mexico City, one that takes the blows but continues right on to the end, one that may face many setbacks but gets there eventually. A mighty earthquake may shake the city to its foundations but the city will recover and rebuild.

The project is being developed by Mexico’s Secretariat of Communications and Transport (SCT) as part of the transport development plan announced by Mexican President Enrique Peña Nieto, who allocated US$9.2 billion for the construction of a new airport in September 2014. It is one of the world’s biggest airport infrastructure projects and is expected to be the biggest airport in Latin America.

The new airport will have an initial capacity to handle 70 million passengers a year, which will be increased to 125 million annually through expansion by 2062. Construction started in 2015 and the first phase is scheduled for completion by late 2020.

“For the past 20 years, there has been a constant demand for the airport’s expansion due to the rapid increase in the rate of passengers and cargo transportation at the existing airport. Although the airport has two runways, only one can be operated at any given time as the landing strips are located too close to each other,” said Crispin Salazar, director of Grupo Aeropuertuario to MexicoNOW.

“The existing facilities of the airport are no longer sufficient to serve the increasing passenger traffic, which is feared to limit the growth of air travel in Mexico, pushing the government to seek a viable solution for accommodating all current and future aviation demands of the region. The new airport will initially have double the capacity of the existing airport and would eventually be able to handle four times the current traffic.”

The airport will be an X-shaped single roof structure with a compact terminal enclosed in a lightweight grid-shell. The architecture is composed of famous Mexican symbolisms that represent the national identity including an eagle, the sun, a cactus, and a snake.

The roof of the terminal represents an eagle with its wings open to take flight. The terminal entrance will have a lush cacti garden with the access roads designed in the form of a snake. Rich and intense colors that represent Mexican culture will be used for the functional components of the building façade. The central hall of the structure will be illuminated with bright colors that represent Mesoamerican symbol of the sun.

The design ensures few level changes, less walking distances and easy navigation, avoiding the need for internal trains and underground tunnels for internal transport. The roof will be made of lightweight glass and steel and will be free from ducts and pipes.

Known as the “Airport of the Future”, the single airport enclosure will be sustainable as it uses fewer materials and energy than a cluster of buildings. The structure uses natural sunlight, collects rainwater, and achieves a high performance that meets high thermal and acoustic standards.

The airport will use clean and renewable sources of energy and will operate with green technologies promoting an efficient use of water, ventilation systems and air-conditioning.

The new airport is being constructed on federal lands near the former Texcoco Lake. The structure will be spread over an area of 4,430 hectares, which is under the purview of the National Water Commission.

Once the NAICM is operational, the Benito Juarez airport will cease operations because the Secretariat of Communications and Transportation (SCT) ruled that is technically incompatible to operate two airports in nearby locations.

The SCT awarded the airside infrastructure design contract to a consortium led by NACO in January 2015. Other companies in the consortium include Royal HaskoningDHV, Grupo TADCO and Grupo SACMAG.

The US$79.55 million contract includes the design of three runways, capable of handling big passenger aircraft such as the Airbus A380, related taxiways, platforms and support buildings.

Both public and private resources will finance the new airport. The initial investment for the project is estimated to be US$11billion, of which the federal government would invest US$7.8billion. The Mexican Federal Government has recently upgraded the total cost of the project to US$13 billion.

The public money, composed of multi-year revenue, investment and surpluses, will contribute 58% of the funds, whereas private funds from bank loans and issuance of government bonds will contribute 42%.

Recently, the Mexico City Airport Group (GACM) issued 300 million stock certificates and collected US$1.62 billion. A Fibra E, an infrastructure trust fund, made this transaction. At least 4 Afores, companies that manage retirement funds, bought most of these stock certificates.

“Fibra E for the NAIM does not represent public debt and does not count with the Federal Government endorsement. Those stock certificates will be paid by the surplus of the current airport and, in a nearby future, by the new airport,” said GACM.

Furthermore, Patiño said an additional source of resources is the special tariff the airport users pay every time they use the facility.

According to GACM data, the investment in the airport during 2018 will be up to US$1 billion and the project is moving along within schedule. The project will also be financed through bank loans.

The ongoing works at the NAICM shows some improvements. The initial stage has three construction axles: the preliminary works, the Earth side -which includes the terminal-, and the Air side.

The works on the Air side of the project has 2 ongoing projects. None of them is fully built. The progress of these works ranges from 50% to 63.95% and none has been fully funded. The projects include runways #2 and #3.

Even though most of the financial reports and contracts are available for the public on the NAICM web page, the Federation Audit Entity (ASF) found “irregularities” in some of the works done at the NAICM in 2016.

The ASF said some entities still need to justify US$52 million, which includes some works such as a perimeter fence built by the National Defense Secretariat (Sedena) as well as some cost overruns in some material and services.

Patiño said the request for bids, tenders and contracts are public; therefore, anyone can have access to them. The GACM has awarded 321 contracts for 292 companies to do the work at the new airport. The most recent bid awarded was to build the deep drainage and the winner was ICA.

AMLO wants to change the project

By the time you read this piece, we will have had the Presidential election coming in July 1, 2018. As of today following is a brief description of the candidates’ position on the NAICM.

Andres Manuel Lopez Obrador, front-runner for Mexico’s presidency, disagrees with this project. On a first instance, he said he wanted to cancel the NAICM. Now, Lopez Obrador says he wants to franchise the project to be built and operated.

Lopez Obrador is the only presidential candidate willing to change the scope and structure of the NAICM.

Ricardo Anaya, the PAN candidate, said the new airport is an important infrastructure project, but he considers that all the process to grant bids and the finances must be transparent.

Also, Jose Antonio Meade, the PRI candidate, said the NAICM is a must for Mexico and in his Twitter account he stated, “the big projects in the country must not be stooped by personal obsessions.”

The private sector in Mexico does not support Lopez Obrador’s plan either.

In conclusion, like those afflicted parts of Mexico City after the earthquake last year, the new international airport will rise and be a beacon of modernity to the world.