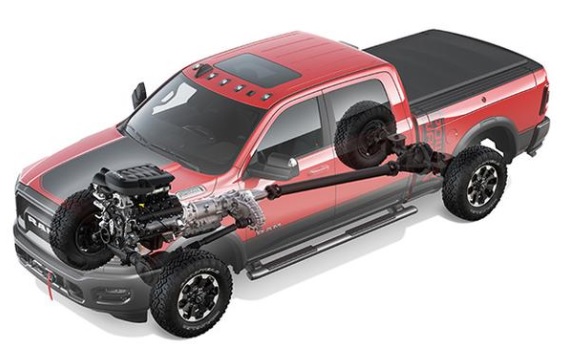 It was one of the most anticipated debuts of the evening. However, it came with a somewhat unexpected label: One that said “Made in Mexico.”

We are talking about the new RAM Heavy Duty pickup that was unveiled yesterday at the North American International Auto Show (NAIAS) in Detroit––the same vehicle whose production Fiat Chrysler Automobiles (FCA) announced with great fanfare would be moved from Coahuila to Michigan.

But first, let’s discuss the novelties on the new lineup of heavy duty Ram pickups, the first of its kind to reach the milestone of 1,000 lb.-ft. of torque thanks to an I-6 6.7-liter Cummins High Output Turbo Diesel engine, which allows a towing capacity of 35,100 lbs. and a payload capacity of 7,680 lbs.

However, the standard engine in the new truck will be a 6.4-liter Hemi V8, mated to an eight-speed automatic, which can deliver 410 horsepower and 429 lb.-ft. of torque.

The new 360-degree surround-view camera with trailer reverse guidance view provides a single display-screen view of both sides of a trailer to assist drivers in maneuvering towing setups.

The completely redesigned interior also stands out due to its new authentic premium materials, colors and textures, including hand-wrapped leather instrument panels.

Did you say “Made in Mexico”?

Yep. Despite two previous statements, the new line-up is still built at the same assembly plant in Saltillo, Coahuila, which is the plant that makes the current outgoing version.

Back in January 2017, FCA revealed that the next Heavy Duty Ram models would be manufactured at the Warren Truck Assembly Plant in Michigan. One year later, the company made headlines again with another media release that confirmed the move.

But when FCA announced yesterday that the new pickup is still manufactured in Saltillo, CEO Mike Manley had to face harsh questions from the media in Detroit, even though, in a previous interview, he had already talked about the possibility of a change of plans.

While Manley did not back away from the company’s original plan, he said that options are still being analyzed for the company’s next offensive in the light truck market.

“I’m going to be making an announcement on that probably in the next two weeks, of exactly where those vehicles are going to go and the levels of investment and the jobs that we will generate, but they will require capacity. We can’t produce them in the volumes that we expect in the capacity that we’ve got,” Manley said to Detroit Free Press.

The new generation of HD Ram trucks will go on sale in the spring with pricing yet to be announced.