Nissan sets end of production date for the Tsuru 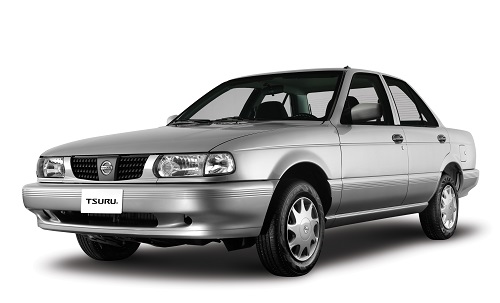 Nissan confirmed today the end of production of the Nissan Tsuru in Mexico by May 2017.

“The popular unit, with more than 2.4 million sales to date, has provided accessible, economical and dependable mobility for drivers across Mexico and other markets for more than three decades,” said Nissan in a press release.

The company expects to continue its Mexican sales and production leadership despite ceasing production of the iconic sedan.

“In the Mexican automotive industry, Tsuru is one of the top sales leaders,” said Mayra Gonzalez, president and general director, Nissan Mexicana. “The majority of Mexicans have some history that binds us to the Nissan Tsuru. The sedan, which has a huge following, has provided families in Mexico high-quality, reliable and durable transportation since 1984.”

A special commemorative version of the Nissan Tsuru will be sold beginning March 2017, with only 1,000 units available. The company will also continue to support Tsuru customers by offering service and parts for the repair and maintenance of its vehicles for the foreseeable future.

Nissan confirmed that although no direct substitute for the Tsuru is planned, the company will direct customers toward models like the Nissan Versa, the industry’s sales leader, as well as other models like Tiida, through their different available versions.

Nissan Mexico’s overall production volume will not be affected by the Tsuru announcement due to production increases at the company’s two Aguascalientes plants, including the recently introduced Nissan Kicks.

Additionally, the new Daimler and the Renault-Nissan Alliance joint-venture manufacturing complex, COMPAS (Cooperation Manufacturing Plant Aguascalientes), will start production in late 2017. The COMPAS plant will allow Nissan to surpass the 1 million manufacturing benchmark in Mexico before the end of the decade and, when it’s at full capacity, the company will add an additional 3,600 employees to its 15,000 team members in Mexico.