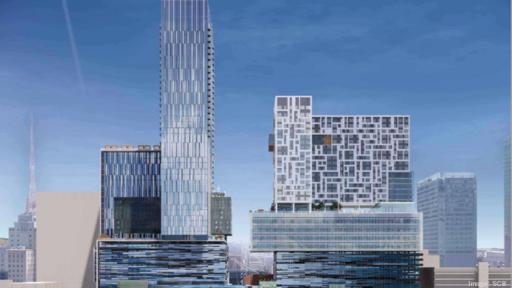 Council approved an amendment that will allow Aspirant Development, a division of Scottsdale-based Empire Group, to build a mixed-use project, called Astra Phoenix, which will include a tower reaching 535 feet at its highest point — surpassing the state’s tallest building, the 483-foot Chase Tower on Central Avenue. A second planned tower would reach 380 feet. Apartments and a hotel are proposed for the towers.

Council also approved realigning the Taylor Street pedestrian paseo through the project between the two towers.

Solomon Cordwell Buenz is the architect of the mixed-use project.

On the other hand, Nick Wood, a partner at Snell & Wilmer, the zoning attorney for the project, said activity in downtown Phoenix has put the city on the map for capital markets looking for places to invest.

“Phoenix has become a mainstream name when it comes to high-rise development,” he said at the time. “With all of the investment that has been made by the city and state in downtown, it has drawn high demand.”