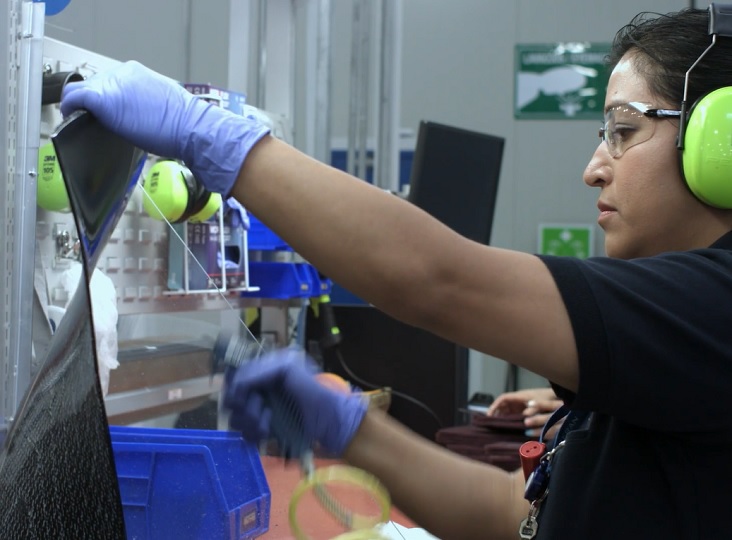 This is Safran’s third manufacturing plant in Queretaro and sixth facility overall, since the company also operates three maintenance, repair and overhaul (MRO) centers in the state.

This third joint plant is similar to and complements the two existing plants in Rochester, New Hampshire (United States), and Commercy (eastern France), inaugurated in 2014. It involved a total investment of about US$ 100 million and delivered its first parts in October 2017, primarily making 3D woven composite fan blades for the LEAP engine from CFM International.

As the LEAP program develops, this plant will also make guide vanes. The investment needed to add this capability will start this year, with delivery of the first parts expected in January 2019.

The new joint Safran/Albany plant in Mexico currently has nearly 230 employees, operating in a facility with 31,000 square meters (334,800 sq.-ft) of floorspace. The total workforce is expected to reach nearly 600 by 2021, to handle annual production of more than 20,000 composite blades and 31,000 outlet guide vanes.

Located in the Queretaro Aerospace Park, this newest plant benefits from its proximity to other facilities, including Safran Aircraft Engines Mexico and Albany’s Machine Clothing plant in Cautitlan.

Safran and Albany have been working closely together for nearly 20 years. Through this high value-added partnership, they have developed the 3D RTM (resin transfer molding) process used to produce fan blades and cases for the LEAP engine.

The use of 3D woven composites makes a significant contribution to the LEAP’s performance, since it offers 15% lower fuel consumption and CO2 (carbon dioxide) emissions than previous-generation engines.

“Our selection of the city of Queretaro for this new plant was primarily based on the excellent results logged since the construction of our first plant at this location more than 10 years ago,” said Philippe Petitcolin, CEO of Safran.

“This location was also confirmed by the relationship of mutual trust we have developed with local authorities and our partner Albany, and our shared vision of the excellent potential for the development of a Mexican aerospace industry. The creation of jobs and associated training programs are at the heart of this project, which also clearly reflects Safran’s proactive international development strategy,” Petitcolin added

Joseph G. Morone, President and Chief Executive Officer of Albany, said that “after building three plants together, Albany and Safran know what collaboration means and what partnership requires. And so, we understand, better than most companies, that the culture of collaboration here in Queretaro is rare by any global standard. And it is this spirit and culture of collaboration that is one of the most important reasons why this plant is right on schedule, and already successfully manufacturing advanced 3D RTM composite parts, and already contributing to the LEAP program.”

The construction of the new Safran/Albany plant in Mexico was announced in 2016 to support the ramp-up in LEAP production, which should reach a peak rate of more than 2,000 engines per year in 2020.

Having already recorded over 14,000 orders and commitments, the LEAP is the fastest-selling engine in the history of aviation. Today, more than 210 LEAP-1A and LEAP-1B-powered airplanes are deployed by 33 operators on five continents, and they have already logged over 610,000 flight-hours and nearly 300,000 cycles.

In addition to the Queretaro facilities, Safran operates the largest aircraft wiring plant in the world, in Chihuahua. When it was inaugurated in 1996, the plant was the first aerospace manufacturing plant in Mexico.