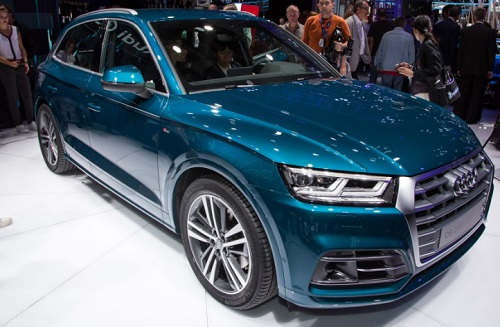 Soon-to-be-built in Mexico, the redesigned Audi Q5 made its debut at the 2016 Paris auto show bound to be lighter, more dynamic and more fuel-efficient that the model it replaces.

The Q5 has lost as much as 198 pounds compared with the outgoing model, according to Audi, in spite of a half-inch increase in wheelbase and 1.3 inches more overall length.

The vehicle features a design inspired by the larger Q7 and with its sculpted lines and bold grille appears much more masculine than the predecessor model.

Specifications are yet to be announced for the United States but experts say the base powertrain to be a turbocharged 2.0-liter inline-4.

The Q5 will be built at the brand’s new factory in San Jose Chiapa, Puebla, which has seen a $1.3 billion investment and will assemble 150,000 cars annually.

There is not an exact date yet as far as when production will commence, but the factory has already started “training personnel”, as two sources “with knowledge of the project” have confirmed with Reuters agency a couple of months ago. Rumor has it a hybrid or an all-electric version will be produced soon after.

– Just in: Audi to inaugurate its Mexican plant on September 30