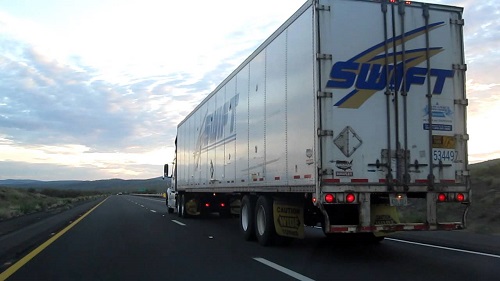 Swift Transportation Company, a leader in transportation solutions and the nation’s largest truckload provider, will celebrate its hard-working Swift team members during National Truck Driver Appreciation Week. “Held in conjunction with the company’s 50th anniversary celebration, Swift aims to honor the driving force behind the company’s success, its professional drivers”, said the company in a press release.

Founded in 1966, with a humble dream and the same entrepreneurial, can-do spirit that still drives Swift’s values; today, it is unquestionably one of the largest full-truckload motor carriers in North America—generating more than US$ 4 billion in annual revenue.

The company deploys more than 18,000 trucks, 60,000 trailers, 16,000 drivers and 5,000 owner-operators across more than 1.5 billion miles of road each year; and boasts a terminal network of more than 40 full-service facilities across the continental United States and Mexico. In addition, Swift maintains a daily presence in every Canadian province.

“We’ve enjoyed an impressive run during our first half century, accomplishing amazing things during this time,” says Richard Stocking, President and Co-CEO of Swift Transportation. “But that’s just the beginning. We are primed and prepared to accomplish even more in the next 50, and we will do so by holding to two founding principles that have gotten us this far—integrity and leadership.”