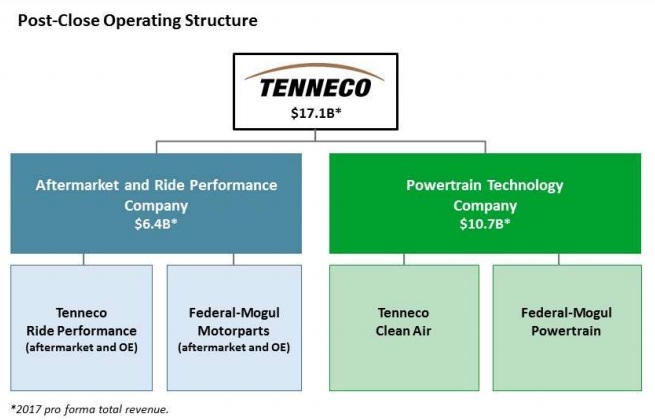 The acquisition will be funded through cash, Tenneco equity and assumption of debt. Icahn Enterprises L.P., owner of Federal Mogul, will get US$ 800 million cash and 29.5 million of Tenneco common shares in the deal. The equity value of the deal is US$ 2.4 billion. Federal-Mogul had gross debt of US$ 3.1 billion.

Illinois-based Tenneco is one of the world’s largest designers, manufacturers and distributors of Ride Performance and Clean Air products and technology solutions. Its principal brand names are Monroe, Walker, XNOx and Clevite Elastomer.

The company operates 90 manufacturing facilities and 14 engineering centers located in 24 countries on six continents and approximately 32,000 employees worldwide. In Mexico, it owns four production sites. Two facilities belonging to its Clean Air division are located in Aguascalientes and Puebla. Another two production sites, dedicated to products of the Ride Performance division, are located in Celaya, Guanajuato and Reynosa, Tamaulipas.

Federal-Mogul LLC is a diversified global supplier of products and solutions to manufacturers of automotive, light commercial, heavy-duty and off-highway vehicles, as well as in power generation, aerospace, marine, rail and industrial. Wagner, Ferodo, Champion and Moog are among its best-known brands in the aftermarket segment.

The Michigan-based company with nearly 55,000 employees worldwide operates with two business divisions, each with a chief executive officer reporting to Federal-Mogul’s Board of Directors.

Its Motorparts division operates six production sites in Mexico, located one each in Los Reyes, Tepotzotlan, Tultitlan and Itztapalapa (Mexico City). Another two plants are located in Ciudad Juarez.

Those facilities manufacture components for clutch, brake and suspension systems, as well as filters and wipers.

Tenneco also announced its intention to separate the combined businesses into two independent, publicly traded companies through a tax-free spin-off to shareholders that will establish an aftermarket & ride performance company and a powertrain technology company.

“This is a landmark day for Tenneco with an acquisition that will transform the company by creating two strong leading global companies, each in an excellent position to capture opportunities unique to their respective markets,” said Brian Kesseler, CEO, Tenneco.

“Federal-Mogul brings strong brands, products and capabilities that are complementary to Tenneco’s portfolio and in line with our successful growth strategies.  Unleashing two new product focused companies with even stronger portfolios will allow them to move faster in executing on their specific growth priorities,” Kesseler added.

“Icahn Enterprises acquired majority control of Federal-Mogul in 2008 when we saw an out-of-favor market opportunity for a great company. During that time, we have built one of the leading global suppliers of automotive products. I am very proud of the business we have built at Federal-Mogul and agree with Tenneco regarding the tremendous value in the business combination and separation into two companies. We expect to be meaningful stockholders of Tenneco going forward and are excited about the prospects for additional value creation,” Carl C. Icahn, Chairman of Icahn Enterprises said.

– Tenneco to supply bushings for Daimler Trucks from Reynosa facility