The Collapse, the Recovery and the Challenges of the Airlines in Mexico 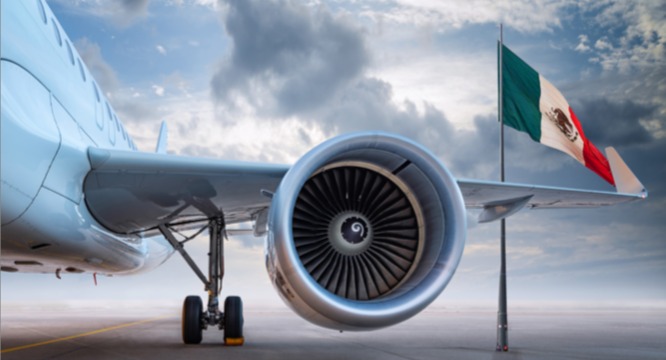 A year ago, on 11 March 2020, the World Health Organization (WHO) declared the COVID-19 outbreak a pandemic. Since then, daily life across the globe has changed. Air transport has remained one of the hardest-hit global industries since the very beginning of the crisis. Last year marked the end of a decade of consistent growth in global passenger traffic. While many countries have started to gradually reopen many parts of their economy, many states were confronted with subsequent waves of infections and several jurisdictions opted for the re-imposition of partial lockdowns.

Along with the human tragedy, the crisis has also resulted in dramatic damage to the global economy, trade, and mobility. Practically all aspects of economic and social activity were, and are still, disrupted. Despite positive signs and prospects for recovery, COVID-19 remains an existential crisis for airports, airlines and their commercial partners worldwide.

The pandemic has also reconfigured the market share of Mexican airlines. The year 2020 marked a before and after in the country’s aeronautical industry, which saw the most profound changes in history. So far, we cannot identify any airlines that are considered to be “a winner” in this economic, social and political disaster for the country. What we can find are big losers by this situation, who are even out of business at this time.

Another point that is affecting the airline industry in Mexico is the fact that last May, the United States lowered its air safety rating to Mexico, which means that Aeromexico, Volaris and Viva Aerobus will be able to continue the flights that they already have in the U.S., but they won’t be able to add new ones.

The Federal Aviation Administration (FAA) downgraded Mexican aviation to category 2 due to deficiencies in the technical staff of the Federal Civil Aviation Agency (AFAC), in addition to the lack of training of inspectors and a weak regulation that fails to comply with the requirements to sanction and guarantee minimum safety guidelines.

The downgrading of Mexican aviation to category 2, from 1, will benefit U.S. airlines, which will be able to increase their market share by around 10% during the following months, so U.S. companies would have an 85% concentration of the air market between both nations. In addition, the downgrade ends Delta Airlines’ ability to sell tickets on Aeromexico flights and a similar cooperative agreement between Volaris and Frontier Airlines.

“This is a particularly challenging situation at a time of recovery for an industry that has been hit hard by the pandemic. Ensuring safety under strict international standards will always be the priority and the FAA and the local authority have shown their willingness to work on reviewing the necessary parameters,” explained José Ricardo Botelho, general director of the Latin American Air Transport Association (ALTA).

René Armas Maes is the Commercial Vice President and associate of MIDAS Aviation, a specialized aviation consultancy in London. He made the following comment on the fact that U.S. airlines will seek to increase frequencies to Mexico, fly larger planes, which would benefit the companies of that country in the midst of a complicated financial situation due to the health crisis: “This would fit like a glove for North American airlines since they would place several of their planes that are grounded today or with a low utilization of eight hours or less on these routes while they will be able to optimize their income per passenger, route profitability and return.”

The National Chamber of Air Transport (Canaero) said that the consequences of the degradation of Mexican aviation are serious and will impact the recovery of domestic companies in the international field. Their position is as follows: “In the middle of the recovery period of the most important international market for the country, they (Mexican airlines) will not be able to increase routes or frequencies or register additional aircraft.”

Enrique Beltranena, executive president and CEO of Volaris, explained that the airline under his charge has carried out “multiple actions to strengthen our financial liquidity, reduction of costs and to capture the opportunities presented in the market.” He said: “Moving forward, due to the current situation of COVID-19 cases in the U.S. and Mexico, we will continue with a disciplined approach to market deployment and route selection to achieve profitability.”

Juan Carlos Zuazua, general director of Viva Aerobus, considered that 2020 represented challenges for the entire sector, but said that the business model in the airline allowed increasing the operation, identifying new market opportunities and growing in the preference of travelers.

There is a path to recovery. With the biggest vaccination campaign in history underway, we were seeing some positive signs and prospects for recovery. According to SCT, March and April of this year started to show a positive record compared with the past year.

As we can see, numbers of the airlines are far away from the numbers of passengers transported last year, but the present fills us with optimism for the near future, as since the vaccination campaign entered into force in Mexico the numbers are getting better and better.

The analysis must consider the fact that in 2019 the scenario was different, with Interjet located in fourth place maintaining a share of 19.7%, just below Viva Aerobus that maintained a percentage above 20%. Interjet reported the cessation of its activities since December 11, 2020, without updating the date to re-establish its flights, if it does so. The future of Interjet is highly uncertain and pessimistic.

The airlines Viva Aerobus and Volaris overcame the effect of the COVID-19 pandemic in their respective passenger traffic, at least during the last weeks, when they registered levels that exceed the flows prior to the health crisis.

In just four years, Volaris went from having 29% of the national market share to the current 40%, a figure that places it 10.19 percentage points above Grupo Aeromexico, its main competitor that, adding Aeromexico and Aeromexico Connect, achieves 29.81% of the market share.

As we mentioned before, for this year, while Interjet stopped operating in December 2020 and Aeromexico is going through a complex process of financial restructuring under the United States Bankruptcy Law—with layoffs of more than 2,500 workers and the elimination of 40 aircraft— Volaris will go on the market to find more ships to expand its routes.

In the last two years, the firm led by Enrique Beltranena, assumed command in the domestic airline industry and, despite the pandemic, was positioned as the Mexican airline with the highest number of passengers transported.

The ultra-low-cost airline, Viva Aerobus, released its results for May 2021 and highlights that for the first time it reached 1.34 million passengers transported in one month, representing a growth of 35% over what was recorded in May 2019, and 16.5% over April 2021. May 2020 cannot be taken into account since it was the worst of the pandemic’s lockdown and only 117,063 passengers were transported.

Managing Director of Viva Aerobus Juan Carlos Zuazua commented: “Achieving the highest monthly passenger record in our 15-year history, within a challenging environment like this, only proves the full confidence that passengers have in our service and their confidence in flying again.”

Good news is the recent announcement that Grupo Aeromexico has sufficient liquidity and cash flow to continue with its Chapter 11 process, present its reorganization plan and organize its exit financing, in view of the new constitution of the company, according to El Economista.

As a final reflection, we have three variables that we must consider for the drastic reconfiguration of the domestic market for airlines in Mexico.

Definitely, the stoppage of Interjet operations and its uncertainty have opened a great window of opportunity for the other airlines that will have to cover headless routes and a large number of passengers that were transported by Interjet and will now fly by other airlines.

The great recovery is coming: The great vaccination campaign and the progress to control the COVID-19 pandemic once again reactivates tourism, both for pleasure and business, congresses and conventions and surely the airlines will be reactivating their operations, being the low-cost airlines who are emerging faster in Mexico.

The third point to recover is the effects on the airline industry in Mexico is the fact that, last May, the United States lowered its air safety rating to Mexico.