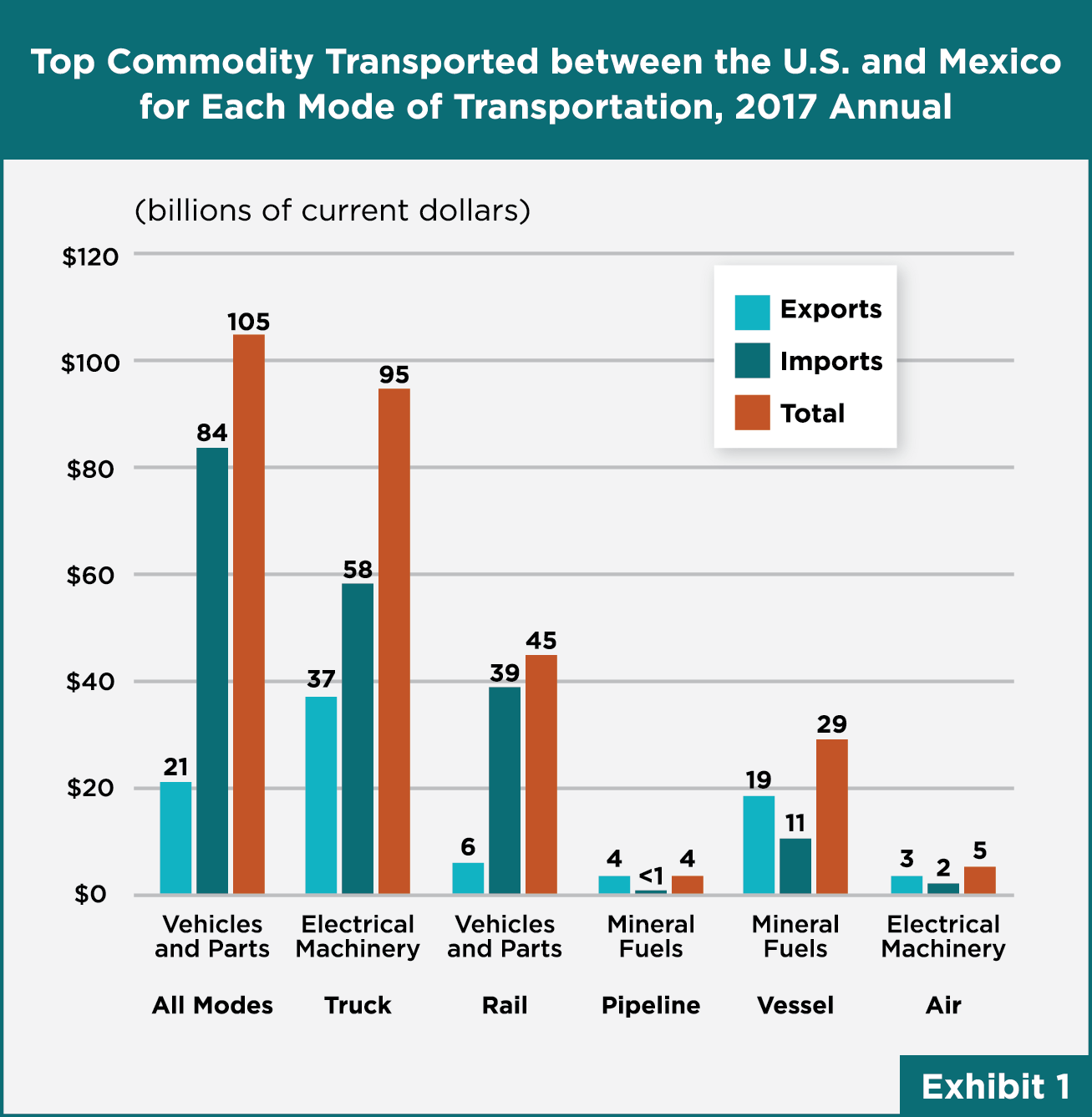 Even though cross-border trade surpassed US$500 billion yearly, most of the goods and raw material transported through the U.S.–Mexico border use infrastructure built in the middle of the 20th century. Border infrastructure faces the challenge to expedite logistics while the neighbors’ governments become budget minded.

A study by U.S. Customs and Border Protection concluded that US$6 billion were needed to modernize U.S. land ports of entry (POE), but the agency has only received US$2 billion. Mexico has not conducted a study to analyze the investment needed in its international land ports of entry.

“Without adequate cross-border infrastructure, border economies are at least weakened and at worst paralyzed. Given its critical nature, transportation infrastructure requires an all-hands-on-deck approach, with federal, state, and local government from both sides of the border working in concert with one another, the private sector, and local communities,” a Wilson Center study says.

The shortage of federal funding for upgrades and additional staff at America’s ports of entry has opened the door to creative solutions, including partnerships with private companies eager to move international commerce faster and more efficiently.

Trucks and bottle necks at the border

Trucks are crucial in cross-border trade because they carry 69.1 percent of the value of freight to and from Mexico, shows the Bureau of Transportation Statistics (BTS). The most common goods that trucks carry include electronics, machinery and auto parts. (EXHIBIT 1)

In the last decade, the number of trucks crossing the U.S.–Mexico border has increase drastically. In Texas, the traffic increased 23 percent in 10 years, 15.3 percent in California, and 8.91 percent in Arizona. New Mexico registered the highest increase in truck border traffic with a 204 percent percentage in a decade.

Furthermore, the Mexican trucking market is flourishing and it is forecast to continue growing in the upcoming years. A recent market study published by Armstrong & Associates shows this is a US$60 billion industry in Mexico.

“Proximity to the U.S, low wages, increases in manufacturing competencies, and retail investments throughout Mexico are keeping trucking in Mexico afloat,” the report states.

The increase in cross-border traffic was not, however, matched by the slow pace of infrastructure modernization and expansion, adding stress to the transportation networks and ports of entry across the U.S.-Mexico border. In fact, many ports of entry look much as they did when they were built long before the North American Free Trade Agreement (NAFTA) was implemented.

The old infrastructure at the ports of entry has called for innovative, technological solutions. One of them is the dual inspection program. At least three pilot programs are active in Tijuana, Laredo and Nogales. Plans also call for a similar measure at the Santa Teresa POE in New Mexico.

Rail is the second option to move cargo along the U.S. – Mexico border. This kind of transportation represents almost 15.3 percent of all exports and imports transactions on this region and 14.4 percent of the value of freight.

Moreover, 42 percent of carloads and intermodal units and more than 35 percent of annual rail revenue are directly associated with international trade, particularly with Mexico, shows a recent study published by the Association of American Railroads.

Railroad companies forecast this industry can grow 13 to 20 percent annually and many of them are heavily investing in new infrastructure to be more competitive and keep the pace of the main industries in both countries. Companies trust in U.S agricultural and future energy exports to Mexico to increase demand for rail shipments at the border.

The U.S. has 7 Class I railroad companies and 6 of them have U.S.-Mexico cross-border activity. According to their websites, this activity accounts for up to 40 percent of these companies annual traffic. The Class I’s North American network hinges on a north-south freight corridor that connects key commercial and industrial markets in the central U.S. with major industrial centers in Mexico.

To keep up with trade growth between Mexico and the U.S., some binational projects have been approved, but still it is not enough to clear the bottlenecks in some international rail crossings. In 2015, the U.S. and Mexico opened the first, new international railroad in more than a century.

Also, the Presidio-Ojinaga International Rail Bridge and 72 miles of track on the state-owned South Orient Rail Line received funding for reconstruction and repairs.

“The South Orient Railroad has become an increasingly important freight line for the agriculture and oil and gas industries in West Texas. The improvements will allow enhanced freight opportunities for communities in Texas and between Texas and Mexico, with greater efficiency and safety,” Texas Transportation Commission Chairman Tryon Lewis said.

Kansas City Southern, Watco Cos. LLC, and WTC Industrial partnered to aid and expand the exportation of liquid fuels from the U.S. to Mexico. About 60  of this company’s cross-border traffic moves southbound, including shipments of auto parts, grain, food products, steel, paper and industrial machinery. Northbound traffic predominantly is intermodal freight and finished vehicles.

Also, Union Pacific is a key player on cross-border freight. UP is the only railroad to serve six of the U.S. – Mexico gateways in Brownsville, Eagle Pass, El Paso, Laredo, Calexico, and Nogales. The company says it handles more than 65 percent of all rail traffic between Mexico and the U.S.

In 2014, UP completed a US$400 million intermodal ramp in Santa Teresa. The facility, which can “lift” 225,000 containers per year, moves cargo between the Los Angeles-area ports, Texas and the Midwest.

Unfortunately, even though this modern intermodal station sits at the border, just 15 miles from the Mexican Ferromex rail track, they are not connected (Ferromex is a subsidiary of UP). Rail movements in this region still have to go through downtown Juarez and El Paso, significantly limiting the cargo capacity, as rail cars are only permitted to transit slowly and at specific small time slots.

“Combining reliable service with the cost efficiency of short sea shipping and the 50 percent shorter transit time versus land routes, we create a compelling alternative for customers moving goods between the eastern U.S. and Canada to and from central and southern Mexico,” said CGR Senior Vice President Kevin Wild.

Even though rail cargo increases the number of transactions every year, the infrastructure along the border to transport the merchandize has not changed too much in Mexico even after the privatization of the railroad.

Public-private partnerships, transportation grants, donations, and even crowdfunding are some options border communities have now to create the infrastructure and fund the staffing at the POEs to accelerate trade and connectivity to improve the logistics and competitiveness.

Since 2013, CBP has entered into Reimbursable Services Agreements with 20 stakeholders, providing more than 93,000 additional processing hours at the request of the partners.

Senator John Cornyn said in a recent event the federal government has failed to keep up with the infrastructural needs of the international crossings, saying public private partnerships will be needed to streamline crossings until the solution is found at the federal level.

For years, some border communities have awaited to upgrade their POEs, while others hope they can get a new border crossing to accelerate trade.

One of the obstacles for logistics in Mexico is its highway system. About 86 percent of the highways in Mexico are two-lane roads, but for a competitive infrastructure it needs four-lane roads. Furthermore, most of the major highways are not connected.

Mexico has made much progress in upgrading and modernizing its network of interstate highways since the National Infrastructure Program (NIP) was launched in 2007.

The Mazatlan–Matamoros corridor, when complete, will serve as the Port of Mazatlan’s gateway to the rest of Mexico. Texas has its own project to pair this highway and is boosting development of the new Interstate 69, which will link major border crossings with major seaports.

A second corridor, La Entrada al Pacifico, links the Mexican state of Chihuahua with Texas in the Rio Grande crossing of Presidio. Ultimately, La Entrada is designed to bring freight by rail or truck from Mexico’s Pacific port of Topolobampo.

“A greater awareness of Mexico’s freight transportation policies and planned infrastructure improvements is needed to allow the public and private sector to effectively plan for anticipated growth in trade,” says the Texas Freight Mobility Plan recently issued by the Texas Department of Transportation.