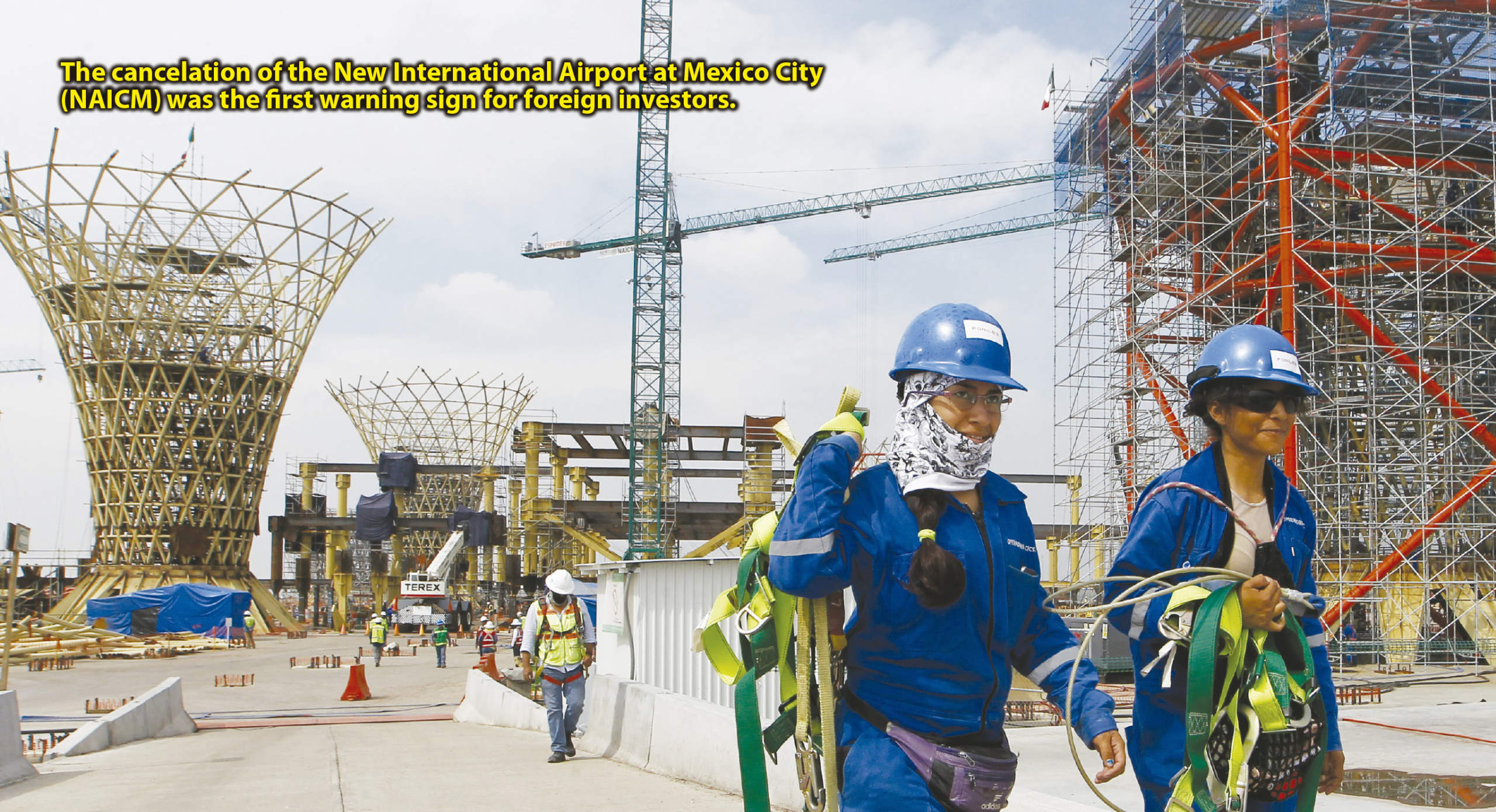 The cancelation of the New International Airport at Mexico City (NAICM) was the first warning sign for foreign investors. Then, the Mexican Federal Government promoted a referendum against Constellation Brands, which ended up in the denial of several permits needed to operate in Mexico.

Moreover, the rule changes in the energy sector and the prioritization of projects that will have limited social and economic impact, such as the new refinery in Tabasco, the airport at Santa Lucia and the Maya Train are also a concern for investors.

These actions have had already a negative impact in Mexico. The country is not longer part of the 2020 Kearney Foreign Direct Investment Confidence Index. Last year, Mexico was in the bottom of this list in the 25th place. This year, Mexico is no longer considered attractive for foreign investors even though the United States, Mexico, Canada Agreement (USMCA) came into effect on July 1st. It is the only country from North America that is not on the list.

The Foreign Direct Investment (FDI) numbers show a decrease of the money foreign companies asigned to Mexico. The northern region in Mexico has been negatively impacted by this investment decrease. The region has always been a top FDI recipient due to its intense manufacturing activities, prosperous mining, energy industries and geographical location.

During the first quarter of 2019, the northern region captured US$3.7 billion of FDI. This figure represented 36.4% of the total FDI in Mexico. Nowadays, during Q1-2020, the region’s inflow was US$2.73 billion or 26.4% of the total foreign investment in the country, according to the most recent data published by the Ministry of Economy (SE).

Nuevo Leon kept its second place in the country as a top recipient of FDI, while Chihuahua, Tamaulipas and Coahuila descended in the ranking compared to the same quarter last year. On the contrary, Baja California and Sonora scaled up a few places (EXHIBIT #1).

During this period, Coahuila had the worst performance going from the seventh place in Q1-2019 to the 17th in Q1-2020. This state only captured US$166 million in the first quarter of the year, its worst number in the last five years.

Tamaulipas ranked fourth during the Q1-2019 and it ended up in seventh this year. Tamaulipas attracted US$467.3 million of FDI, which is in line from the numbers in the last five years.

Nuevo Leon has been the number 2 FDI recipient for a long time. This year, this state has captured US$1.14 billion, almost 10% of the FDI in Mexico. Its numbers in the last five years have been constant and above the US$1 billion in the first quarter of each year.

Nuevo Leon has been the number 2 FDI recipient for a long time. This year, this state has captured US$1.14 billion, almost 10% of the FDI in Mexico. Its numbers in the last five years have been constant and above the US$1 billion in the first quarter of each year.

Even though the US$188 million of FDI Sonora captured during the Q1-2020 is one of the lowest figures in the last five years, this state was able to move up in the ranking. Its strongest first quarter was in 2017 when it got US$552.9 million.

In previous years, these northern states announced new investments, new companies willing to relocate in their border cities, but in late 2019 and early in 2020, almost no announcements have taken place. Most of the new investments have been organic, made by existing firms.

Experts are not positive about Mexico’s fate because they consider uncertainty is very harmful for Mexico, specially now with the ongoing COVID-19 pandemic.

Luis Niño de Rivera, president of the Association of Banks of Mexico (ABM), explained that the competition between nations to attract investment is intense, specially due to the ongoing COVID-19 pandemic; therefore, Mexico will have problems attracting investment if it continues to send signals of uncertainty to entrepreneurs looking for a place to install their resources.

“ Those who have the resources to invest are being more selective and the countries have to compete within those preferences. Competition is very sharp, because there are countries that provide facilities, clear rulesm and attractive conditions of natural resources. I do not know if Mexico will be more or less attractive, but it will have problems competing,” he said during a recent videoconference.

But the current federal government’s decisions, headed by Andres Manuel Lopez Obrador (AMLO), is not only costing Mexico to lose FDI, but also tax payer money. This also happened during the previous administrations.

In the last 20 years, Mexico has paid US$252 million in fines for violating trade agreements by arbitrarily obstructing foreign investment, data from the SE shows. This figure does not include the money that will be paid to Constellation Brands if the company and the government do not reach an agreement after the cancelation of the US$1.4 billion brewery in Mexicali.

Currently, there are 11 active cases in arbitration, and seven more could also end in arbitration since they are at the stage called notice of intention.

“ These situations create uncertainty among national and foreign investor and that will continue to be a relevant factor for those who have the option to invest,” said Niño de Rivera. “Without Gross Fixed Investment, without clear rules, without permanent conditions of those clear rules, without
adherence to the rule of law, we will not have investment.”

Even though FDI flow has been impacted by the decision taken by the AMLO administration, the SE said the forecast is positive for 2020 and 2021. The COVID-19 pandemic might worsen the scenario because companies might cancel investment or wait a while before taking a decision of where to put their money.