US auto sales expected to increase in March, boosted by increased discounts 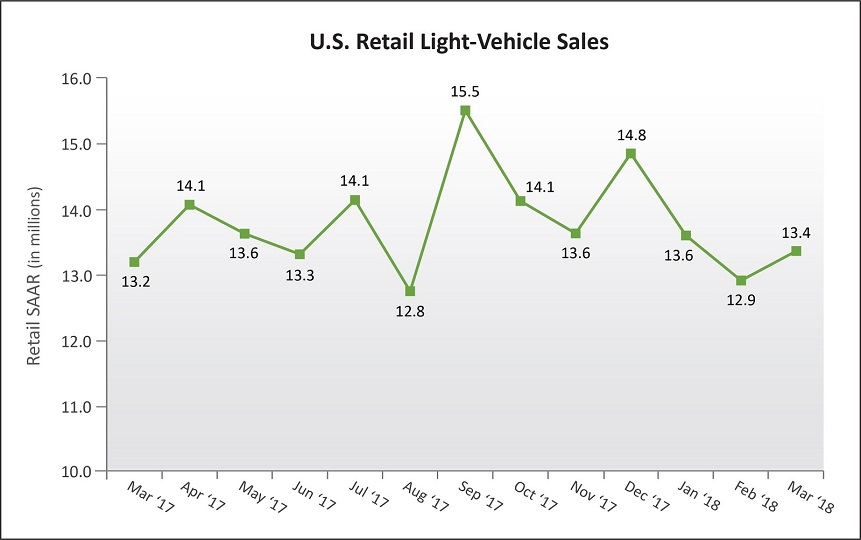 U.S. auto sales are expected to increase 0.2% in March to 1,275,000 units, according to a forecast developed jointly by J.D. Power and LMC Automotive. The seasonally adjusted annualized rate (SAAR) for retail sales is expected to be 13.4 million vehicles, that 200,000 more units from a year ago, which also represents the first year-over-year increase in the year.

“Despite the disruption from inclement weather on the East Coast, the industry is expected to post year-over-year retail sales gains for the first time in 2018,” said Thomas King, Senior Vice President of the Data and Analytics Division at J.D. Power. “While this breaks a streak of three consecutive months of decline, the industry is boosted by a quirk in the calendar due to an additional selling weekend.”

On a national basis, retail sales through the first three weeks of March are up 0.5% from last year, but in the Northeast, sales are down 0.5% over the same period.

Average incentive spending, however, continues to rise and month-to-date is US$ 3,849, up US$ 74 compared to same period last year. Spending on trucks and SUVs (up US$ 160) is driving the increase while spending on cars is down US$ 54.

The average new-vehicle retail transaction price month-to-date is US$ 32,129, a record for March, surpassing the previous high of US$ 31,391 set in March 2017. Consumers are on pace to spend US$ 41 billion on new vehicles in March, more than US$ 2 billion greater than last year’s level.

Trucks account for 66% of new-vehicle retail sales through March 18—the highest level ever for the month of March—making it the 21st consecutive month above 60%.

Days to turn, the average number of days a new vehicle sits on a dealer lot before being sold to a retail customer, is 70 through March 18, a flat result compared to last year.

Fleet sales are expected to total 335,300 units in March, down 1.2% from March 2017. Fleet volume is expected to account for 21% of total light-vehicle sales, also a flat result compared to last year.

“Auto sales remain on track for the expected marginal decrease on the retail side of demand for the year. The shift from cars to SUVs is expected to be more pronounced as we forecast SUVs to pick up 2.5 percentage points of share to 45%. Risk remains concentrated on NAFTA negotiations and tariffs, though optimism of a NAFTA deal is growing. Interest rates are rising as expected and we are looking for a total of four rate hikes in 2018, a headwind making borrowing more expensive and raising monthly payments,” said Jeff Schuster, Senior Vice President of Forecasting at LMC Automotive.